Setting up the installation

This week setting up the AI tent/dome structure went as planned. I had previously made the base and experimented making the actual top covering of the structure, along with more experimentation, which led onto making a plinth and cushion for inside the structure. So basically it was just a matter of mainly putting all this together, although there were some areas inside the structure that I felt uncertain about. For instance I was pondering on the idea of covering the black screen frame with white lace, but after placing the screen inside, the frame aesthetically looked better leaving it uncovered. I had also planned on having a sign on the floor of the installation, saying - Enter Alone, I decided against this as upon placing the sign on the floor I immediately felt unhappy with this.  Since coming from a sculptural background the singular round cushion placed in front of the plinth/screen expressed this without the need for words, and this looked aesthetically so much better without the sign too.

Below are some photos of the installation: 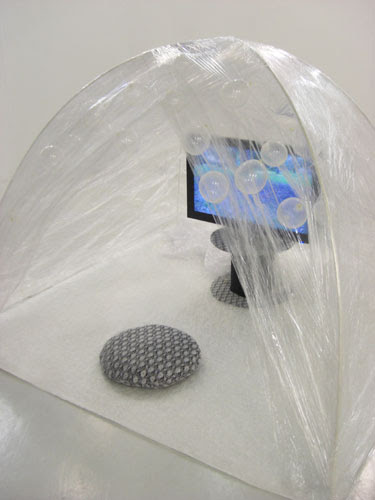 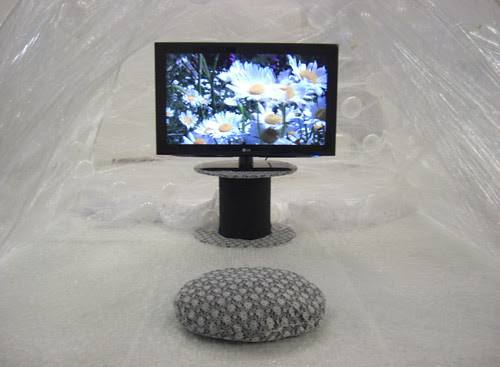 After experimenting, I decided to cover just the base of the monitor with lace.  I had not covered this properly when I took the photo below. Here I was just playing around with the fabric to get a rough idea, but I have since covered just the base. The first top 2 photos above are practically how the finished installation looks barring the covering of the base of the screen. 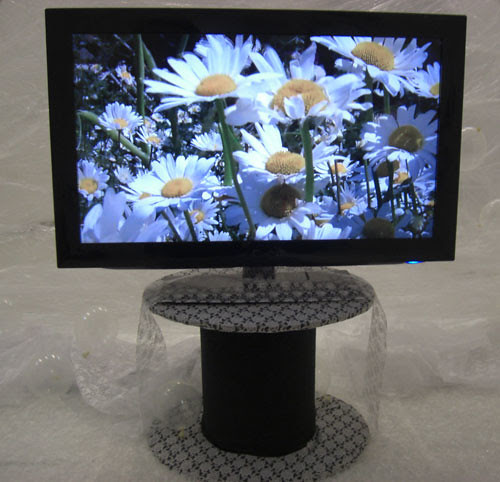 The video (below) is my finished video that is part of my installation to be viewed inside the hypothetical AI dome/tent structure:


The sound on this video (above) is how I intended it to be, though the video has lost some quality by uploading to youtube. However I encountered a few problems with the monitor that I borrowed to use in the show.  Firstly I noticed loss of quality in both audio and video. Originally I thought this was due to limited  formats and settings which the screen would only play, but now I'm thinking could it be the read speed of the flash drive? I bought a 2.0, 8 Gb flash drive with a read speed of 25 mb per second, which I thought would be fast enough, but in hindsight I should have bought one with a faster read speed. I will experiment using my class 10 SD card that I have already which has a read speed of 30 mb/s. This may not work any faster either due to going via a  USB 2 card reader, but I will try it out before the show by downloading a speed tester to see. However I will also see if any of my friends have got a flash drive with higher read speeds that I could borrow for the show as I would ideally like the quality to be better. If no one has I will have to buy another flash drive as I think this may definitely be worth a go, but I just wish that I thought of this earlier.

Although there are  imperfections with the video and audio when using the monitor, overall I am really happy with the way the installation has turned out. I'm looking forward to seeing The Traveller in the group setting, along with feeling excited about seeing everyone's finished artworks, as from what I've seen already, I think it's going to be a fantastic show.

This week has also been fab meeting the group which are a really lovely bunch of people. Jonathan kindly invited us all round his house for food which was really cool. I also found there to be an unusual familiarity meeting the online students, since we have chatted via skype for 2 years but have never met before. I've never encountered meeting people this way round until now, which for me has been an interesting unique experience.