This experiment consisted on another spirograph plate. I used the same method as the previous spirograph experiment but only this plate had 19 sounds/patterns. The sounds of the patterns merged together are quite different than before, though the visual effects are very similar when no effects are used.

In the first video below I added some post productions effects to blend the spirograph patterns. The second video has no effects other than using the zoom lens on my camcorder to make the patterns move.

Exploring the sounds and visual effects of spirographs together.

This is an experiment recording each individual sound/pattern of a spirograph. The project involved first picking a random spirograph plate, then drawing each of the possible spirograph patterns on that plate using randomly selected coloured pens. First I had the system (1) the spirograph pattern. I also had the random elements (2) the choice of spirograph plate & the choice of coloured pens used. I filmed as I created 13 different spirograph patterns using various coloured pens & then extracted the 13 different audio recordings from those recordings. I then created a ‘sound collage’ by combining the sounds of the 13 different audio tracks. To this I added the visual effects which were accidentally created by zooming the camcorder onto the drawing which naturally created the movement. I had no idea this would happen and it was quite interesting to observe the effects of the zoom lens on the static drawing.

I am quite pleased with the outcome of this experiment. I found bringing all the patterns/sounds together expresses a rather stressful emotion overall. Whilst the colours are very calming and the individual patterns are very pretty, the overlaying of all the patterns/sounds within the spirograph are quite stressful. The movement is reminiscent of a heartbeat trapped within a system which is articulated by the merging of the visual/ sound and movement creating a disturbing yet contradictory effect against the visuals of the calming colours. I found the outcome to be quite weird as this is very similar to previous work where I deliberately set out to create similar contradictory emotions. Yet with this I had no idea of the outcome.

This is a record of the method I used for this experiment: 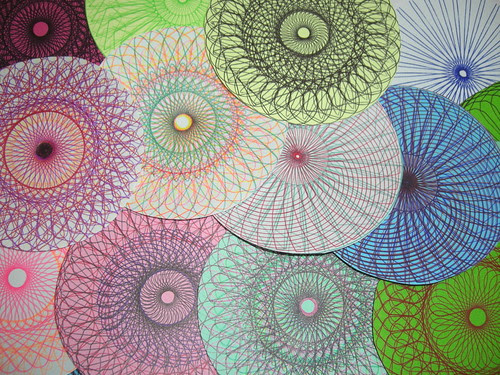 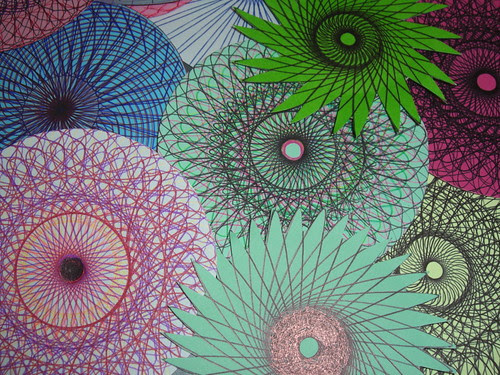 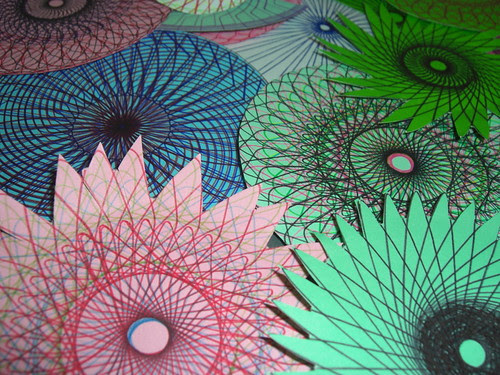 This week’s chat session was on the subject of quantitative & qualitative research. For some reason I have had trouble remembering the differences between them until I found this funny video.  Since watching this I don’t think that I will ever forget now :-)

Highrise/Out of My Window is an interactive documentary by Katerina Cizek that focuses and connects the lives of the people around the world who live in blocks of flats. This weeks chat session was centred around this topic.

Click here for link about Highrise Out of My Window.

Click here for interactive video of Out My Window.


The first window I clicked on used interactive video pan technology. Impressive, I’ve never seen real 360-degree interactive videos before. After the initial wow factor of playing with this I got hooked on the real life stories and watched them all. I was in tears with some stories, but also found it intriguing to see inside people’s homes and extremely inspirational to hear how people helped each other through difficult times. I loved the way this was done it gave a real insight into people’s lives on a very personal level.

In some ways I found Highrise quite similar to an Installation that was at the Tate Modern in 2007 called Global Cities: Click here  This focused on the growth and expanse of cities and populations around the world. There were also videos of people talking about their lives too, but I found Katrerina Cizek’s Highrise/ Out of My Window had much more of an impact on me.  Besides the 360-degree interactive video technology being very impressive I found the emphasis on the individual much more personal. I think this was due to the narrative, though it was debated in our chat that there wasn't one, well not in the traditional sense. For me the narrative was the connection of all these people living in practically identical homes yet all having unique lives and experiences. In one sense it’s very similar to a question within my own project: How does individualism prevail within a system?  If you see the system as a structure of concrete buildings then this would be seeing how individuality exists within that system. I found actually seeing inside someone’s home gave it a much more individual and personal edge which seemed quite special.

During our discussion on Highrise some other issues arose. Open-source was mentioned and the group talked about their thoughts on whether an open-source community could create something like Highrise. While I think open-source is the way forward for many computer programs I’m not so sure for something like this. It may possibly work but I have concerns that it may turn out terrible. Since a young age I have been a fan of Star Trek, and have also watched some fan films too and to be honest found them absolutely rubbish with bad acting, terrible FXs etc. Don’t get me wrong I’m not saying that people shouldn’t make fan films either, but it would be a shame to see Highrise turn into the equivalent of a fan film.

Another interesting topic arose from the chat. Osiris pointed us in the direction of Sea Dragon & Photosynth:


Sea Dragon and Photosynth demo
Uploaded by tedtalks. - Videos of the latest science discoveries and tech.

I found this technology to be both brilliant and scary at the same time. I think what concerns me the most is the thought of this technology being able to recreate and replicate a person in 3d. I have visions of people being framed for crimes they didn't commit, but may be this is just me being cynical.
Posted by Kay Johns at 23:43 No comments:

Existence: Individualism or Mechanism?
Exploring the notion of how individuality exists within a system.

My primary aims for this project are to create a video/audio installation that expresses and questions the transformation of individuality within the conglomerate. I intend to explore the notion of how individuality exists within a system, along with questioning the notion of individualism/mechanism in my work (this may change depending on the perspective). Since this topic is quite complex I can only really hope to explore aspects of this vast subject. I aspire to convey these ideas by experimentation with pattern transformations and randomness using a process for the making of the work called Generative Art.
Secondary Aims:
To research Chaos Theory, and experiment with repetitive but random processes within both the natural and electronic realms.

Over the years my work has developed from making dynamic sculptures into creating multimedia installations, by exploring kinetics, sound and digital video. The historical context of my work can be found in a combination of art practices from Kinetic Art, Anti-Form Movement/Process Art, Video Art and Sound Art. In the past I have been intrigued by the Kinetic ready-mades of Marcel Duchamp. The Anti-Form movement and artworks by Robert Morris titled Scatter, Richard Serra’s Splatter, and the Subway Drawings by William Anastasi as they all have a dynamic quality and an element of chance. I am also fascinated by Video Art and the works of Nam June Paik, along with the experimental generated Sound Art by John Cage.

The contemporary artists and artworks that I will be researching for this project will be by Brian Eno, Philip Galenter, Bill Viola and Amy Stacey Curtis. At the time of writing, and as far as I am aware the most relevant contemporary artwork that relates to my research is called 77 Million Paintings by Brian Eno. This is a generative artwork that reflects notions of individuality and transformation within a collective.

The key words that reflect my project are Generative Art, Systems, Interconnectivity and Individuality. The theories and ideologies I will be using to explore my question/artwork can be linked to these keywords. I have listed my main theoretical areas of study below:


My methodology for this project will be a combination of the following:

Primary Research/Contextual: I have contacted Generative Artist/Theorist Philip Galenter and arranged to interview him later in the year. I will be also be researching other practitioners: Brian Eno, Bill Viola and Stacey Amy Curtis. I will examine not only their artwork but also research how they judge what is objective and observable. I will also visit exhibitions, galleries and museums.

Studio Practice: To explore methods and practices relating to generative art. Since the subject of my question and process of making art simultaneously will play a major part in exploring my question, I will be researching different systems incorporated within generative art. I will also experiment and make my own systems that I will integrate within my studio practice. Here is a list of my intentions. I will keep a record of my experimentations on my blog:

I am planning to create a digital video/audio installation where either video is projected onto a kinetic sculptural form or possibly there will be a kinetic sculptural installation and a video projection separately but within the same area. At this point I’m not sure about the exact outcome, though the space required will be the approximately the same: 3.5 metres squared. However from previous experience while setting up my BA Degree Show I realised that space can be limiting, and I may not be able to obtain my chosen amount of space. If this is the case I will need to know how much space I would have to work with beforehand so I can experiment within that space. Ideally I would like this area to be built with walls around and a doorway to enter that is also big enough for wheel chair access. I envision the installation to have an immersive quality where only one or two people would enter at a time.

Risk Assessment
I will need to specify that my installation will only be suitable for either one or two people entering at one time. I will do this either on a separate notice or on my personal statement so people can read before entering. This will ensure that overcrowding does not occur and that people can exit easily in case of an emergency. The kinetic sculptural installation will be powered by batteries which is not a concern as they will be hidden from view. I’m not sure at this point where the projector will need to be placed but both computer and projector will be out of the way so not to cause distraction from the artwork. I will need to see where the nearest plug sockets are and take into account the possible use of extension leads. For any cables running along the wall or floor to computer and projector I will use a combination of either cable clips or floor cable covers for both neatness and safety. All cables will need to be tested by an electrician for health and safety purposes prior to the exhibition.

I have split my work plan into a combination of colour coded sections. These topics
are the major stages of my work plan. The details of each section can be found in my methodology that I previously mentioned.

My plan is to research and complete all the areas mentioned in a constructive manner. While I have highlighted a combination of the research topics for the same duration this does not mean that I will constantly be researching them all every day, but what it does mean is that I will switch back and forth for each topic during this time frame until each section is completed. At this stage I do not know when all the course deadlines are so having a flexible timetable that I can change and restructure is also important to achieve these goals.

Galenter, P. What is Generative Art? Complexity Theory as a Context for Art Theory. [internet] http://philipgalanter.com/downloads/ga2003_what_is_genart.pdf [Accessed on 2nd Janurary 2011.