While the concept of my project has stayed the same, there has also been major developments which have happened due to a combination of areas.

While researching and writing my research paper I had begun thinking more about life, linking aspects of metaphysical/ontological inquiry, nature and chaotic systems together. I started filming natural generative elements of nature, and especially enjoyed the filming process, whilst observing pattern transformations within the movement of ocean waves and the shoreline patterns. One of my favourite videos that I filmed so far is:  Drift Line Sand Patterns  It is very calming and the pattern transformations appear more vein like towards the end.  This also coincided with an earlier post about a documentary called The Beauty of Chaos In this post there is a video excerpt of a documentary which explores ideas of a mathematician called Benoit Mandelbrot, looking at how natural fractals in the world form the shapes of mountains, coastlines and river basins; the structures of plants, blood vessels and lungs.  I found this all so fascinating and it led me thinking more about our lungs and breathing, and the connection between our bodies and the natural world. This led me in the direction to experiment recording breathing sounds. Also the idea of using balloons has come from a friend. When she was pregnant she would often  compare herself to a balloon. This gave me the idea to start experimenting with balloons. Ideally I would like to use a number of big clear balloons with a smaller balloon inside. The reason for using clear balloons are so I can also project a video of a collection of natural generative elements through them, to express the links between our bodies and the natural world simultaneously. I have also been thinking about the equations that Benoit Mandelbrot discovered, and have pondered the the idea of projecting actual equations through the balloons, but that didn't feel right as I want to visually express the real natural world in the projection. Though I do think the maths is fascinating, but mathematics is a human concept to describe the natural world. I want to visually show the real natural world in contrast,with using balloons and breathing sounds to symbolise human life forms to express how patterns of life are all connected. The big balloons with smaller ones inside would visually symbolise the creation of an individual within a system, or a reflection of an individual within the system of the world. Some of the big balloons would also contain a small quantity of air from an individual, and I would also include the recorded breathing sound of that person in the audio to be played with a collection of breathing sounds played randomly.

I  now need to do a lot of work on all these ideas through experimentation with balloons, pressure, methods for collecting peoples air and the transferring of air for an exhibition. Along with putting together a video for projection and collecting much more clearer breathing sounds from people than I have at the moment.

While this week's chat covered quite a few interesting topics, I have decided to dedicate this post to Wikipedia. 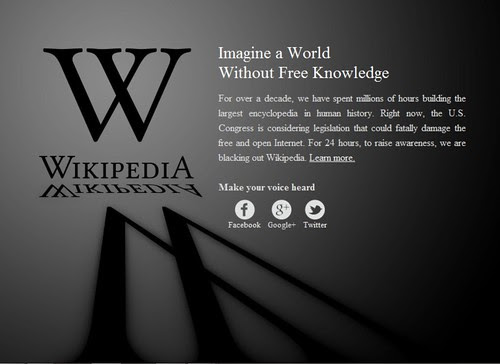 Wikipedia is today protesting against SOPA and PIPA by blacking out the English Wikipedia for 24 hours. SOPA and PIPA represent two bills in the United States House of Representatives and the United States Senate respectively. SOPA is short for the "Stop Online Piracy Act," and PIPA is an acronym for the "Protect IP Act." ("IP" stands for "intellectual property.") In short, these bills are efforts to stop copyright infringement committed by foreign web sites, but, in our opinion, they do so in a way that actually infringes free expression while harming the Internet. Detailed information about these bills can be found in the Stop Online Piracy Act  and Protect IP Act articles on Wikipedia, which are available during the blackout. GovTrack lets you follow both bills through the legislative process: SOPA on this page, and PIPA on this one. The Electronic Frontier Foundation, a non-profit organization dedicated to advocating for the public interest in the digital realm, has summarized why these bills are simply unaceptable in a world that values an open, secure, and free Internet. From Wiki, click here to learn more.


I believe that the general consensus of the group were that these bills should not be allowed to get through. They are an infringement on rights of expression;  and will have a disastrous effect on the internet. This is not the way forward for the future of the internet.
Posted by Kay Johns at 23:06 No comments:

I've been thinking about the breathing sounds of my friends and family that I've been recording lately.  It has been quite funny recording them, but a thought had occurred to me when I first started recording these sounds: What if someone was to die! It would be quite sad having someone's actual breathing sound, even though not really any different than having a photo or video of them talking, but to me it seems quite different.  Anyway I decided  not to think too much about the potential doom and gloom aspect of my project. Instead I thought I would do some contextual research on other artist's that have used breathing sounds.  While I haven't  found any yet using the sounds of breathing, I have found an artist that used his own breathe to blow up balloons. Here's a link to Piero Manzoni's sculpture titled: Artist's Breathe: http://www.tate.org.uk/servlet/ViewWork?workid=26872
While the balloon deflating, probably happened when he was alive, I found this quite sad since he is no longer alive now, but it is also so effective.

Since I've been getting asthma lately, I decided to use to this opportunity to record my breathing.

I found it interesting  that by adding this sound to the balloon video, and changing the effects slightly, how it expresses a totally different emotion. Maybe I could volunteer to do Darth Vader sounds, I just need to tweak the sound slightly :-)

Since just before the seasonal break I have been recording some of my family and friend's breathing sounds. I also asked a few of the same people if they could breath into balloons so that I could collect their air.

Recording the breathing sounds was obviously easy, though tricky for people not to laugh while doing this. However getting people to blow up balloons wasn't working too well. I ended up using a balloon pump to initially start, as people found this easier once the balloon was already a certain size to breathe into. But I decided that for the time being I would just blow up the balloons using a pump and then add their breathing sounds to the video.

I eventually want to experiment creating an installation by hanging lots of clear different sized balloons, with smaller balloons inside, while projecting a video containing scenes of generative elements of nature through them. Also collecting different individual breathing sounds to play randomly. Since I need quite a lot of space to do this and more balloons than I have at the moment I decided to try to create a basic simulation of this environment by videoing a few balloons and then adding some effects and a few sounds. The video clip below is my first experiment of this:

Once again, New Year celebrations and amazing firework displays have been happening all around the world. Here's a couple of my favourite aerial generative art displays of this year.  I have included these as part of my visual research . Happy New Year Everyone :-)