This week's chat session from earlier this week consisted of group tutorials. The tutorials were based on our current theoretical studies. Below is a recap on what I've been doing:

Recently I've been looking at artist's Shardcore and Sam Hewitt. I went to an exhibition by them called The Consciousness Engine where Shardcore was invigilating at the time. I had a chat with him and asked if I could I could interview him at some point and he said sure. He  invited me to a talk that him and Sam Hewitt were doing about consciousness, which I went to. I've also just started reading a book called Emergence by Steven Johnson, which so far has talked quite a lot about self organisation.  I also watched a programme  about the mathematical  ideas of Alan Turing, for instance how he  used mathematical equations to explain and predict emergence of the life-like organisation of chemicals, and how the Russian Chemist  Boris Belousov's  work initiated the field of modern nonlinear chemical dynamics. I found this fascinating that these guys never met yet the mathematics of Alan Turing's equations explained how the  experiments of Boris Belousov's nonlinear chemical experiments behaved.

I will also be looking more into Dadaism since chance and nonsensical were key elements to their philosophy.


Moira suggested that I look at Woody Vasulka.

Jonathan found an interesting link for me to read on Steven Johnson: click here

Kay, I think you have done some excellent research there, and you have lots to explore, the issue will be focusing it all down to something quite controlled using specific artists work is always a good idea and sometimes good to compare it to other work that is broadly similar but maybe comes from a slightly different angle.

Thanks, I will checkout out links and suggestions and write some more here later, cheers K.
Posted by Kay Johns at 13:13 No comments:

Below are three short videos of yesterdays storm. I placed my camcorder on the grass  in my garden and faced it up at the sky.  I left it there for a short time while the storm was happening.  Afterwards I speeded up the film and added some filters. I prefer the first video compared to the second and third, as I think that I may have slightly over done the effects on the other ones..... never :-)

In this video experiment I left in all the jerky camera moving shots that I usually edit out in. I added more filters than in the previous experiments.

I feel quite pleased with how this experiment turned out considering that I did no editing of the actual film itself. I think the movement between the natural generated waves of our physical world, merged with effects from the electronic realm work quite well too :-)

This is another video taken at Shoreham Beach which I colourised and added effects to. The sound had even more noise than my previous video of wave transformations due to high winds, so this time I first used a filter to clean up the audio then applied sound effects.  I used both the original sound track with the volume turned down lowish, along with a copy of the original with sound effects added  for the second track (volume slightly higher).The wind can still be heard but is much more subtle than it was.

Below is a video that I took of waves formations at Shoreham beach. I then added some effects colourising afterwards to give a more abstract feel.  It was a very windy day so there was lots of added muffled noise.  I tried using a high by pass filter to remove this but it didn't work very well, so I used the original sound and turned this down really low and then made a second track where I copied the original sound and then added some filter effects to this track.


Below are some sketches that I did of Shoreham Beach using charcoal. I added an effect called Conte Crayon in Photoshop afterwards. 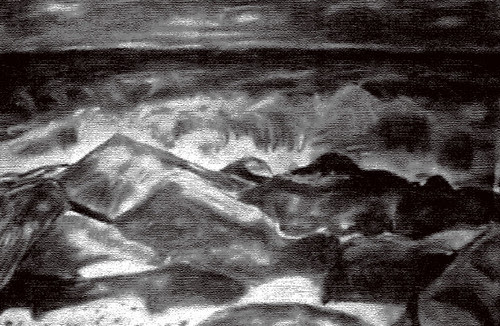 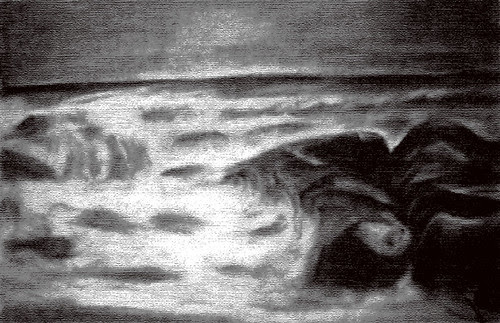 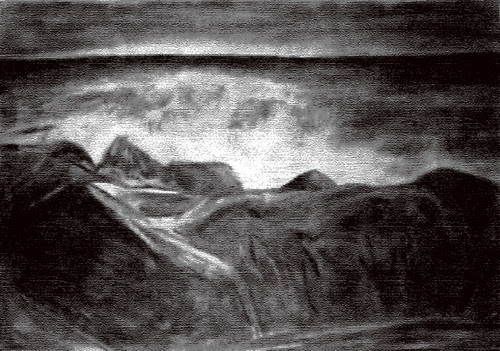 To be honest I haven't given copyrighting or remixing much thought until I watched RIP: A Remix Manifesto click here to view trailer. You can pay whatever amount you choose (or nothing) to watch this film. It's a real eye opener into how corrupt the issues of copyrighting have become.  Over the years Copyrighting has been manipulated for profit by big corporations and has nothing to do with what is fair.  These laws are stifling knowledge and creativity and are out of touch with today's society.

If you are a musician and think that you have never remixed anything, then think again. How did you learn. Was it by ear or was it by learning music? Either way you have learnt from other people's knowledge. Even when you make up a riff, it's all based on your understanding of this knowledge.  Is this remixing and should you be sued for copyrighting?  No, of course not, no one would ever learn anything. So why is remixing thought of as so wrong? This film explains this and they recommend people watch it and have fun remixing the film too.

Below is just a little clip of my attempt at remixing this film :-)

Below is an interactive sample that I had fun with :-)