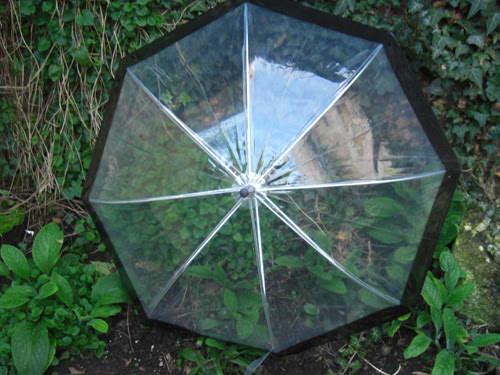 
For my final show I would like to make a Dome where viewers can encounter an immersive experience. I am thinking of making a dome tent out of a combination of recycled polythene and two different sized bubblewraps. The dimensions will be approximately 180cm x 180cm, height:140cm.  I'm aiming at everything being contained within this space: hidden laptop with a flat external monitor in one unit (no design for this yet). The construction and materials for the dome will be made using elasticated tent tubes, recycled polythene and two different sizes of bubblewrap. To make this I am planning on using a clear polythene sheet as a base with a layer of the small bubblewrap design sewn onto this. Each corner will have eyelets for the attachment of the tent tubes. The larger bubbled bubblewrap design will be used for the top cover. This will be made in sections and sewn using clear thread. A section will be left for the entrance. I will take a pattern of this using old newspapers first to get the measurements and then cut the bubblewrap and sew. A fab tip for machine sewing Plastic and PVC is to sprinkle talc onto the fabric beforehand to stop the fabric sticking.  I've never actually sewn bubblewrap before so hopefully it will be similar only with added sound effects :-)

While the actual making of the dome will take a while, once it has been made it will be very easy to set up and lightweight to transport.

My main concern is whether this dome will be too big to have for the show. I don't think it will but if it is I can always do this somewhere else and film.

I took the photo below using an old tent cover on the ground just to give me an idea of the dimensions :-) 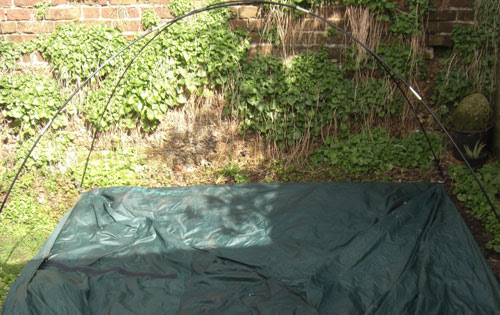 Next I will have to go shopping for some eyelets, bubblewrap, clear thread, and some white paint to paint the poles.
Posted by Kay Johns at 15:24 No comments: 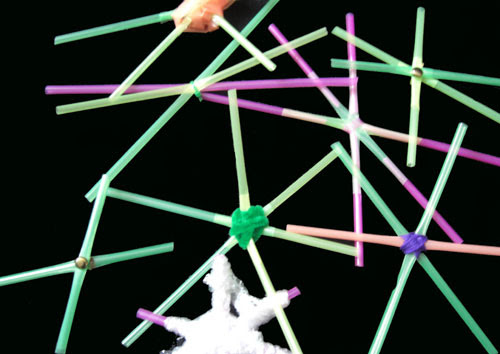 I found Tacita Dean's film in the Turbine Hall of the Tate Modern to be quite remarkable.

The film is an 11-minute silent 35mm film projected onto a gigantic white monolith standing 13 metres tall at the end of a darkened Turbine Hall. It is the first work in The Unilever Series devoted to the moving image, and celebrates the masterful techniques of analogue film-making as opposed to digital. The work evokes the monumental mysterious black monolith from the classic science fiction film 2001: A Space Odyssey. The film feels like a surreal visual poem, including images from the natural world among others, with the epic wall of the Turbine Hall showing through, in a montage of black and white, colour, and hand-tinted film. Tate Modern Website

Here's a video about the exhibition:


I really wish that I had taken my video camera to film this. I only took my camera and the movie setting on it isn't great but at least I managed to video some of the balls disappearing into clouds and the giant bubbles which were my favourite part of this film. I've never seen a film done this way before. Vertical images seemed to fall from the giant screen like rain drops disappearing into the ground. I loved the way this was done, it was quite exhilarating to see something so different.

Below is a video of Tacita Dean talking about her work for the Turbine Hall of the Tate Modern:

Yayoi Kusama is mainly know for her repeated polka-dot patterns which I have seen before, so I found it really interesting to see her other styles of work at the Tate Modern


The video below shows clips from a selection of the exhibition:


The next video is a clip from the Infinity Mirrored Room which was my favourite part of the exhibition.This room was filled with mirrors and lit by hundreds of LED lights which were hanging at various lengths. It looked so amazing seeing all these individual lights and their reflections changing colour. There was a set pathway for viewers to walk through. On each side of the walkway laid approximately 2 inches of water which also reflected the lights in a different way to the mirrored walls and ceiling.


While this was my favourite part of the exhibition I also enjoyed seeing some of the paintings too. One painting in particular had such an emotional effect on me that I felt quite tearful but I couldn't explain why. I like it when art can have a direct effect, it doesn't happen to me very often. It feels similar to experiencing a spontaneous emotion, which I have also experienced before while having acupuncture. It seems that when certain places in the body are pieced it can cause an emotional direct response. Acupuncturist's know where these points are in the body, but I find it interesting that this also can happen to me when I see a combination of colours and shapes in a painting that can be totally abstract and I have no prior knowledge about the painting either. I would actually like to find out more about why this happens....


Even though the videos above look fab, I think you really need to be there to appreciate it properly :-)

I decided to experiment using a monitor rather that a projector for the time being. I did some experiments using a previous video of balloons/breathing sounds. I laid a monitor flat on the floor playing this video and placed smallish clear balloons on top of the monitor too. Below is a photo of the monitor on the floor. 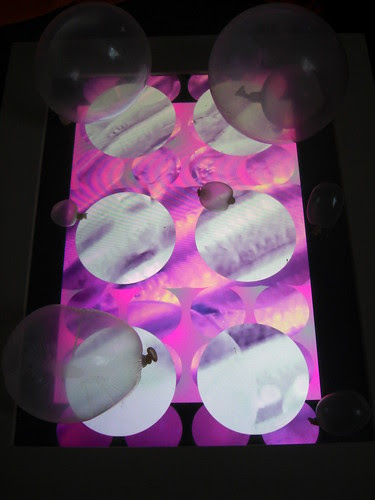 I found some of the same balloons that I used for that video and it was quite interesting to see the changes to some of them. This is one of my favourite, it reminds me of a shrimp: 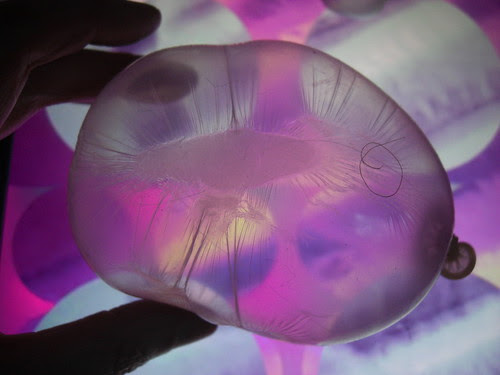 I also experimented with layering by placing the smaller balloons in between the monitor and a glass sheet. While I quite liked this I actually preferred them directly on the monitor screen as they moved about more randomly.

Since my work is exploring individuality and interconnectivity within systems. I want the viewer to connect with this experience by physically entering into a space.  I've recently been thinking of making a structure of a Geodesic dome where either one or possibly two people could enter. Geodesic domes can act like hot air balloons in some ways, if the air inside is heated to a higher temperature to the outside air, then the warm air adds a slight lift to the dome, so the dome can actually weigh less than the materials used to make it!  I also think that for most people in the UK who see this design, they would automatically think of the Eden Project - combining the natural world inside an array of geometric shapes collectively.

I envisage sitting in the dome listening to the breathing sounds with a monitor laying flat on the floor, with small clear balloons on-top of the glass naturally randomly moving, though the viewer can move these if they choose.  A collection of different sized clear balloons are hanging inside the dome, filled with air from the people that are breathing in the recording. The  digital video playing on the monitor would either be a combination of generative elements of nature and balloons though I'm uncertain at this point and need to do more filming and experimentation.

Next I will make a relatively small model of a geodesic dome out of lightweight materials  to experiment with. I haven't ruled out the idea of using a projector, but at least I know now that I can't project through clear balloons.