I create multimedia installations by exploring kinetics, sound and digital video. I graduated in 2009 with a first class BA (hons) degree in Fine Art: Sculpture from Northbrook College in Worthing. I’m now currently studying my MA in Digital Arts at the University of the Arts London, Camberwell. This blog is a recording of my progress. Please click here to view my project proposal.

History and rationale of my work:

I’ve always been fascinated by the visual effect of movement whether it be from human made mechanisms or movement within our natural environment. Due to this interest I simultaneously began to explore kinetics by attempting to make remote controlled sculptures and learn more about the cultural and technological developments in contemporary society. This subject gradually developed and led onto investigating aspects of the Posthuman, which was the basis for my BA dissertation:

I found this topic to be both fascinating and scary at the same time, so my studio work began to be centred on the contradictions I was feeling. After I finished my dissertation, my research led into other areas within biotechnology, where I researched genetically modified organisms and artificial life forms. Again my studio work was based on contradictions. I wanted viewers to feel what I was feeling. My final work for my degree show consisted of an indoor kinetic installation titled: Twitter (based on the idea of genetically modified crops). An outside kinetic installation titled: Xenogenic, and a video exploring the evolution of Xenogenic.
Twitter consisted of 96 kinetic, plant-like geometric coloured straws, growing out of compost on pink paper plates.

Whilst the happy humorous visual element may strike you first. The sounds of the ticking clock mechanisms used to move the plants along with the uniform positioning of the plates in rows, gives a rather unnerving impression. The lighting in this installation was extremely important to enhance the moving shadows which also laid the path for the sinister undercurrents to emerge.

The installation Xenogenic, was outside in the college grounds, it consisted of three circles cut into the ground. This also was based on the idea of a genetically modified crop experiment, only instead of growing crops I was growing artificial manufactured life forms: 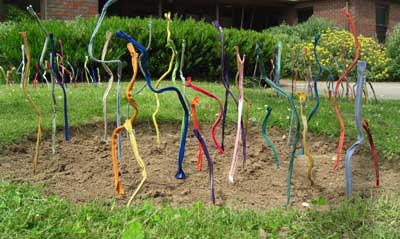 I was and still am really happy with the outcome of both installations. They both expressed the emotions that I wanted to at the time, but on reflection, it has left me asking more questions. For instance the orderly rows of plates with the different sized geometric kinetic straws, all moving at slightly different angles, also expresses a form of individuality, along with Xenogenic and the evolution of artificial life forms. This was not my focus of expression at the time, but it’s definitely an important aspect of this work, which I now feel compelled to explore further in my MA.

Home
Subscribe to: Posts (Atom)
MA Group Exhibition
Website
My Artwork
University of the Arts London, Camberwell.
MA Project Proposal - Existence: Individualism or Mechanism?
This blog is a recording of my progress.