While reading a transcript of Waving at the Machines by James Bridle, I couldn't help but disagree with an aspect of his ideas on the New Aesthetic where he suggests that pixellated images have originated from the digital world and have emerged  into the real world in various forms of Art and Architecture. While in some cases this may be the inspiration behind certain physical manifestations depending on the individual or a group of people behind the work. However I don't think this aesthetic has originated from the digital world!

I grew up playing with Lego, Stickle Bricks and kaleidoscopes and I would argue that this aesthetic originated in the real world, not the digital world! This inspired me to create the artwork below :-) 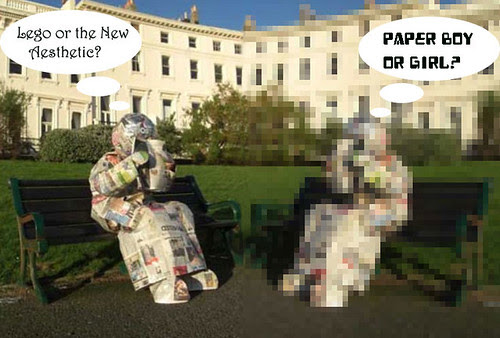 Ok I know that my humour is very silly :-)

For James he obviously grew up with seeing pixellated effects originating from the digital world.

Regarding this artwork: New York Street Art  he says:


This is the natural way that someone who’s grown up with eight-bit video games sees the world.   This is the grain and resolution of it.

So I can see why James thinks this as he grew up with it.

I don't think this is age related either since I have a seven year old niece that loves Lego, and I know that she would think some of these images in James's talk were inspired by Lego too. But, indeed there may be other people out there that may say that this aesthetic originated from something else not Lego either!

I think it really depends on the individual person and what you grew up seeing first, but personally for me I saw these pixellated effects in Lego first, and knowing these toys were around before the digital world - Lego 1930's, Kaleidoscopes 1817,  I would  have to disagree with this aspect in his concept of the New Aesthetic.